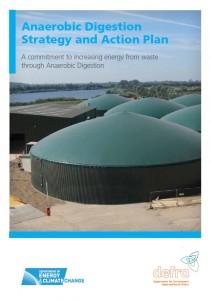 The Government made a commitment to work towards a ‘zero waste’ economy in the Coalition Programme for Government of May 2010, and to introduce measures to increase energy from waste through anaerobic digestion (AD).  Defra published a Framework Document in November 2010 which aimed to set out the necessary steps to achieve this.

Government and industry have since then worked closely together to identify barriers to development of AD and the actions needed to overcome them; resulting in the AD Strategy and Action Plan.

A significant number of actions are aimed at improving the dissemination of information and other actions related to developing best practice, providing an agreed framework for skills and training, and further work to deal with specific technical or regulatory barriers.  Delivery and implementation of the Action Plan is monitored and reported by Defra.

The AD Strategy & Action Plan for England was published in conjunction with the Waste Review. Wales, Northern Ireland and Scotland, while working within the same legislative framework, are responsible for their own waste and energy from waste policies and delivery.

The actions were summarised in Table 2 of the main Strategy document and explained in more detail in a supporting document. Summaries of the action updates and outputs are provided below, grouped by workstream for ease.

Workstream 1: Improving our understanding of the AD landscape

This workstream was led by NNFCC and this Information Portal was one of the primary outputs resulting from the review of available data and information.

16 – Benefits to Employers Report, study shows that training costs are quickly recouped upon completion of apprenticeships

20-23 – A series of project facilitated by WRAP

30 – Case Studies, showcasing best practice from a range of scales and types of AD

Workstream 6: AD in the rural community

42 – List of financial schemes available to AD projects, in conjunction with private and equity finance