The material that is used in anaerobic digestion is called feedstock. What goes into a digester determines what comes out, so careful choice of feedstocks is essential.  Securing a reliable feedstock supply is fundamental to profitable AD and if feedstocks are to be bought from a third party securing a long-term contract on acceptable terms is critical.

The feedstock doesn't have to be waste, any biodegradable non-woody plant or animal matter is a suitable feedstock for a digester. However, anaerobic micro-organisms cannot break down lignin, the complex polymer that gives plants their strength, which means that wood products, paper and straw will slow the digester.

The yield of biogas from a particular feedstock will vary according to the following criteria. Further detail on biogas yields and feedstock productivity is provided at the bottom of the page:

Common feedstock streams are described below and include:

the UK. Around half of this is waste is from households, the rest mostly comes from manufacture, retail, hospitality, other businesses and the public sector.

The most environmentally preferable treatment options for food waste are usually AD or composting. AD is generally preferable because it produces both renewable energy and a biofertiliser, which together do more to offset GHG emissions than producing compost. There are however some organic waste streams for which composting will remain the best option, such as co-collected food and garden waste, or woody garden waste that is collected on its own.

To be treated by ‘wet’ AD systems, food waste needs to be collected separately at source; to be treated by composting, or ‘dry’ AD systems, it can either be separately collected at source or mixed with green waste. The co-digestion of food waste in large sludge treatment plants has the potential to be an efficient way of producing energy from waste, particularly as many of the plants are conveniently located by urban centres.

There are several reports available on the treatment, use and availability of food waste;

The key to a viable and sustainable AD project is a secure supply of quality feedstock. Processing residues such as bakery or brewery waste are good feedstocks for AD, as they offer consistency and a more stable supply. Interest from food and drink manufacturers is strong, developing on-site facilities to convert an otherwise costly waste-stream into a potentially valuable revenue stream.

Examples of such facilities are included on the Case Studies Page; particular examples are Nestle and BV Dairy.

In the UK an estimated 90 million tonnes of manures and slurries are generated each year. These are generally used on the farms where they arise, recycling the nutrients that they contain. The Nitrate Vulnerable Zone (NVZ) Regulations mean that many organic manures cannot be spread in certain periods of the year and must be stored for an extended period before being landspread as fertilisers. There is potential for AD to be used in this situation to capture methane from stored slurries and manures, and also to stabilise and treat these materials.

The digestate produced has a lower biological oxygen demand and can be used as a more uniform, easily calibrated fertiliser than the original untreated manure. Methane emissions from manure management are reduced, and the fossil fuels used in the manufacture of artificial fertiliser are displaced, saving 5 tonnes of CO2 for every one tonne of nitrogen. 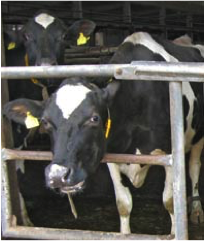 The EA has issued guidance to confirm that manures and slurries used as feedstock for AD will also not be treated as ‘waste’ if used as fertiliser. This applies to both solid and liquid digestate. Other nutrient management regulations and the requirements of the Codes of Good Agricultural Practice for the protection of soil, water and air are still applicable.

Crop residues are also a suitable feedstock for AD. Crop residues are defined as ‘production residues’ produced as an integral part of the commercial production of agricultural crops; these may include damaged or misshapen fruit or vegetables, trimmings and other plant parts which are not the intended end product, such as straw, leaves or tops. These can be collected from the field or from a packing unit, prior to leaving the farm-gate.

The EA has published a briefing note about the Use of Crop Residues in AD which clarifies when they are deemed a by-product or a waste.

Crops can be grown specifically for anaerobic digestion, for stabilising or supplementing other feedstocks such as low yielding slurries or variable quality food waste. Such crops include maize, grass silage, energy beet and wholecrop cereals for example, all of which can be incorporated effectively into existing crop rotations or management regimes.

Encouragement of rotation can result in enhanced yields from subsequent crops by replenishing nutrients, conditioning the soil, reducing the occurrence of soil-borne diseases and improving soil and water quality. Likewise, land which is not suitable for the production of food crops may be suitable to supply biomass to AD plants. However, it is important to be mindful of potential unintended consequences should there be significant areas of crops grown for AD feedstock.

Any intensive production of a single crop could cause environmental concern, whether grown for food, as an AD-specific crop biomass or for transport biofuels; these concerns are generally managed by applying agricultural best practice. The AD industry has published ‘Voluntary Guidelines on Best Practice for Crop Feedstocks in Anaerobic Digestion’ which draws together other relevant best practice principles.

From October 2015, electricity and heat generated by any UK anaerobic digester above 1MWe capacity that uses crops as a feedstock, must achieve a minimum greenhouse gas (GHG) saving of 60 per cent relative to fossil fuel to receive Renewable Heat Incentive (RHI) payments. To support this requirement, NNFCC has launched a GHG reporting tool for use by generators.

AD is one of the most important methods for treating sewage sludge and roughly two thirds of the country’s sludge is already treated in this way. The water industry has a well-established infrastructure of AD plants and extensive knowledge of the technology and its operation. Other organic waste can be ‘co-digested’ with sewage sludge, but different regulatory regimes apply.

The table below shows data on the potential biogas yields of feedstocks commonly used in anaerobic digestion (numbers given in italics are taken from an AD calculator produced for NNFCC by The Andersons Centre, all other numbers are from Biogas from Energy Crop Digestion by the IEA). All figures are based on fresh weight unless stated.

A comprehensive list of biogas yield data is available via the CROPGEN Database.  The full database contains data for 729 different feedstocks and is available to download in Access format from CROPGEN here (4th item on the table). Here you will also find a useful on-farm energy and emissions calculator which can be used for calculating the energy requirements and GHGs for crop production and potential energy generation using an on-farm AD plant.