The process of AD occurs in several steps and requires a community of micro-organisms.

AD is a very flexible process that can be configured in multiple ways, according to the inputs, outputs, site access, space and layout.

The options are described below and the most common for the UK are shown in bold. AD systems can be classified according to whether they are: 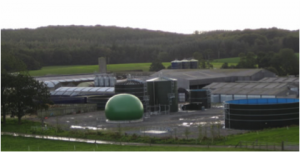 The difference between what is considered a wet process and a dry process is quite small.  Effectively, in wet AD the feedstock is pumped and stirred (5-15% DM) and in dry AD it can be stacked (over 15% DM). Dry AD tends to be cheaper to run as there is less water to heat and there is more gas production per unit feedstock.  However, wet AD has a lower set-up capital cost.

Most digesters are continuous flow as opening the digester and restarting the system from cold every few weeks is a management challenge. They also generally give more biogas per unit feedstock and their operating costs are lower. Some dry systems are batch flow, however. To overcome peaks and troughs in gas production there is usually multiple batch digesters with staggered changeover times.

As explained above, AD occurs in several stages. Some systems have multiple digesters to ensure each stage occurs sequentially and is as efficient as possible. Multiple digesters can give you more biogas per unit feedstock but at a higher capital cost, higher operating cost and greater management requirement. Most digesters in the UK are single or double digesters.

Vertical tanks simply take feedstock in a pipe on one side whilst digestate overflows through a pipe on the other. In horizontal plug-flow systems a more solid feedstock is used as a 'plug' that flows through a horizontal digester at the rate it is fed in. Vertical tanks are simple and cheaper to operate, but the feedstock may not reside in the digester for the optimum period of time. Horizontal tanks are more expensive to build and operate, but the feedstock will neither leave the digester too early nor stay in it for an uneconomically long period.

The best system for you will be determined by what feedstocks are available, what output you want to maximise (e.g. is the goal energy production or waste mitigation?), space and infrastructure.

Read more about AD technology in this brochure, produced as part of the biogas regions project.